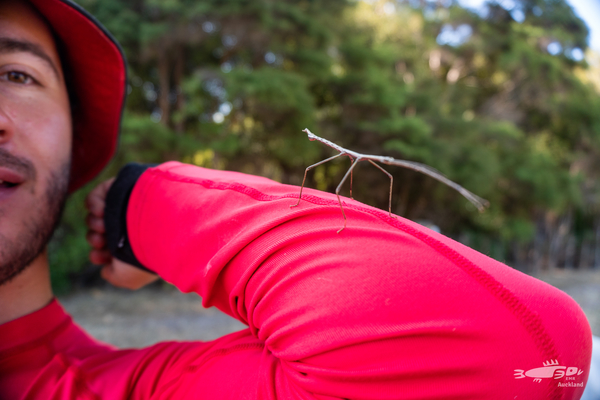 Upon arrival at the Te Matuku stockyard on Waiheke Island, we were met with a large open grassed area for an early afternoon set up. With it being a scorcher of a Summer day that it was, we were thankful for the magnanimous shade of the local Kanuka trees under which to set up our bazaar for the third guided paddleboard of the Te Matuku marine reserve.

After an instructional briefing by both Lorna from EMR and Tom from SUP Waiheke, participants of the first slot were escorted down to the estuary-head of the reserve. Given the saltmarsh mangrove nature of this part of the whopping 690ha marine reserve, participants were briefly treated to a short trot through some fine muds which gauging by the scent, may have shared similar mineral compositional profiles to that of the therapeutic baths of Rotorua, or the naturally remedial springs of Ngawha, nonetheless it provided early humor and added to our total UV protection of our lower legs for the paddle to come.

Upon mounting the SUPs, participants were lead through the estuary and were accommodated with full view of the surrounding mangroves which provide protection to not just native avian species, but fish and invertebrates too. Mangroves are commonly misconceived as troublesome weeds but aside from their wildlife sanctuary properties, they also help prevent erosion by stabilizing sediments with their root systems as well as maintaining water quality by filtering out pollutants. Amoungst these mangroves, participants began to spot freshwater eels and mullet, which despite the murkiness of the estuary, were visibly coming to see what all the enjoyment above was about. As it was nearing high tide, there were a few hurdles with low hanging branches which gave everyone the opportunity to add a little strategy into their fairly straight-forward trip as they were required to lay flat to the boards to clear the obstacles.

When we reached the large opening at the end of our excursion, the importance of the reserve and some past history of it's establishment were shared with us by Lorna, participants also used this opportunity to discuss and share sightings of the White Faced Heron, Tūī, the Kōtare and of birds resembling the highly endangered Bittern/Matuku, of which the Reserve takes it's name - we were also lucky to have Sophie from EMR aboard who has a keen eye (and ear) for identifying native bird species. The vast estuarine opening we reached granted us landscape panoramas comparable to those seen in The Lord of The Rings and NZ nature documentries, and so, without fail, this opportunity in deeper water was not limited to just remarkable photography, but SUP handstand competitions quickly ensued, providing further entertainment as the water was refreshingly cool.

My role as one of the EMR safety kayakers took an exciting turn when one of the participants offered to trade places for a break from standing, and so for the first time, I got to try my two left feet at paddleboarding and there could not have been a better backdrop; admittedly, I was distracted by the scenery of the native bush visible from across the tidal mudflats and longshore sandspits which I still maintain directly contributed to my lack of balance, but nonetheless I managed to steal eyefuls of lovely local scenery while sustaining sufficient buoyancy and for the most part, vertical orientation. When it was time to head back, the tide had come in quite a bit more and the current had picked up and was flowing in our favor, providing a smooth, nearly effortless return back to the estuary head where we had began our small journey.

A special thanks goes out to the crew at Experiencing Marine Reserves and SUP Waiheke, without whom, opportunity for this unique adventure would not have been possible. 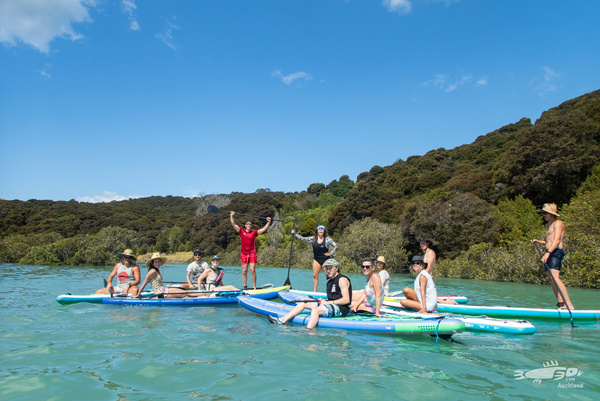