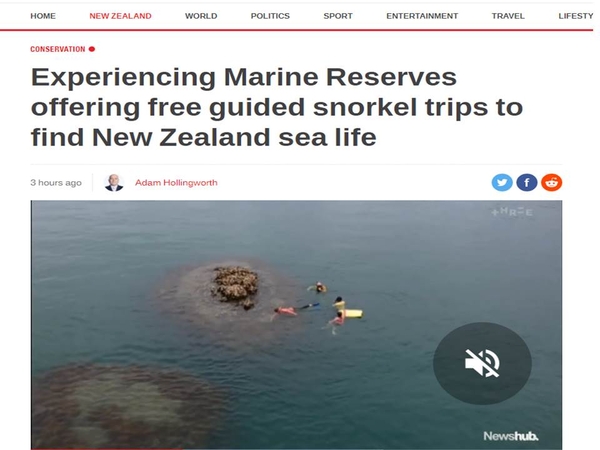 We are looking forward to getting into our 2022 events!

Here is the story from Newshub tonight https://www.newshub.co.nz/home/new-zealand/2022/01/experiencing-marine-reserves-offering-free-guided-snorkel-trips-to-find-new-zealand-sea-life.html

Find out about our events on https://www.facebook.com/emr.mtsct 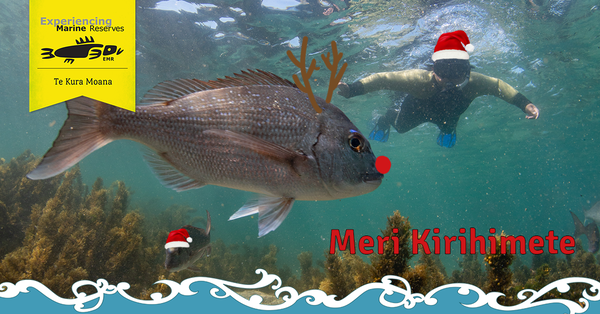 From the team at Te Kura Moana - Experiencing Marine Reserves we wish you a very Merry Christmas and a Happy New Year. Thank you all very much for your support through this tough and chaotic year, despite it's challenges we have still been able to achieve a lot, and that would not have been possible without everyones help.

We hope you enjoy getting out and exploring the beautiful moana over the xmas break. When you are snorkelling this summer don't forget to go with a buddy, take a dive flag, respect local marine protected areas and only take enough kaimoana for the table.

Our team will also be taking a break from social media from the 23rd December to 4th January. We look forward to reconnecting with you all in the New Year. 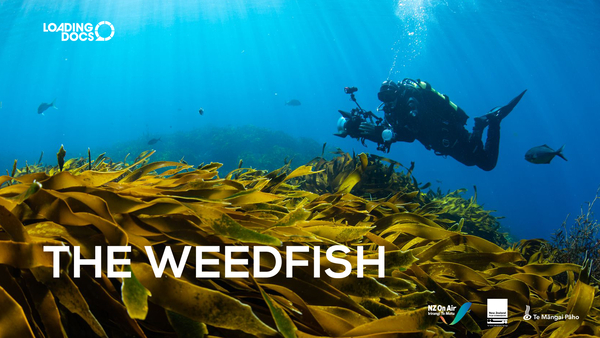 Its conservation week  and we are celebrating the release of the new Underwater Shortdoc called "The Weedfish". The story was produced for Shortdoc platform “Loading Docs” and is about two underwater photographers, Crispin and Irene Middleton from Northland, who embark on a wild search for the Crested Weedfish. Their goal; capturing a powerful photo of this elusive fish before its home is damaged beyond repair. Taking the viewer on a cool underwater journey, showcasing the beauty of the New Zealand ocean as well as the increasing impacts we have on this huge but fragile ecosystem. We all know the oceans are under threat but we need to take more action now to preserve its beauty for future generations!

To support the release of this brand new Shortdoc we have created a fun activity sheet to help you learn about this cryptic ika. Check out the video below to help you fill out the activity sheet and get you thinking about how we look after this little ika's key habitat. For those that complete the activity sheet you can send your finished product to This email address is being protected from spambots. You need JavaScript enabled to view it. to go in the draw to win a Wettie mask and snorkel! 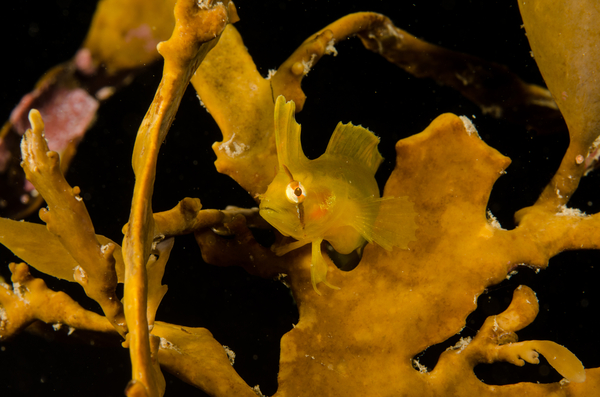 Our waters are under threat. In a bold attempt to defend them, two marine researchers and photographers embark on a wild search for the Crested Weedfish. The goal, capture a powerful photo of the rarely-seen fish before its home is damaged beyond repair. 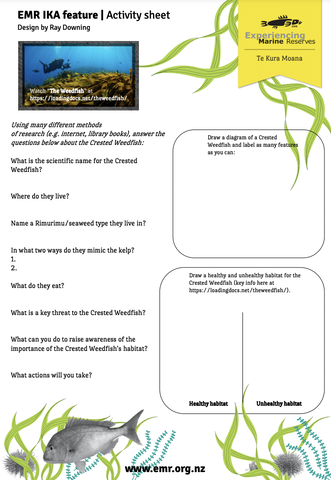 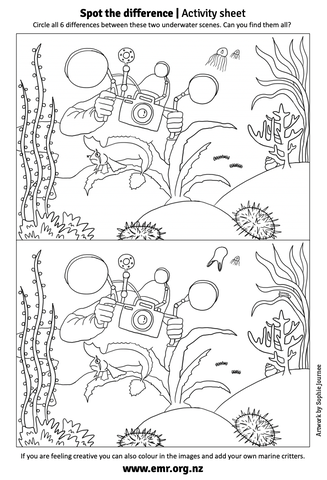 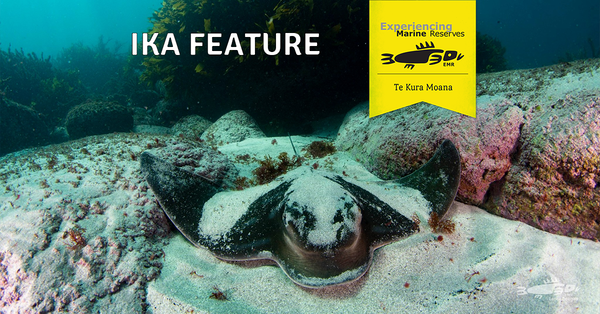 It's time for a lockdown competition!

To highlight our 'fish of the year' winner, whai repo (eagle rays), as well as the other amazing ika of Aotearoa we are starting Ika Feature. We will share fun facts about our amazing underwater friends so we can all gain a greater appreciation of their critical role in our oceans. To kick start this we are running a colouring competition and giving away some fun prizes to the winners of each age category (listed below).

Send your finished colouring sheet or your own whai repo inspired creation to This email address is being protected from spambots. You need JavaScript enabled to view it. or use the hashtag #EMRikafeature. Make sure to include you name and age to qualify for a prize.

Competition closes on the 5th September at 5pm, so start getting creative!!

If you know of any other te reo māori names for the ika we feature please let us know by emailing This email address is being protected from spambots. You need JavaScript enabled to view it. or comment on our social media posts. 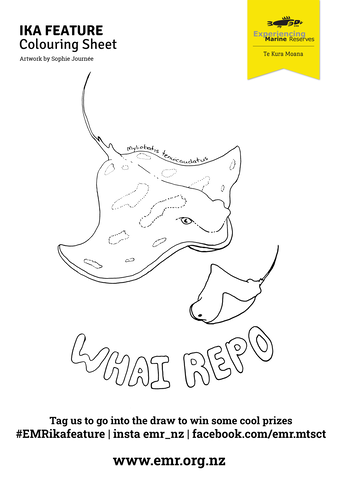 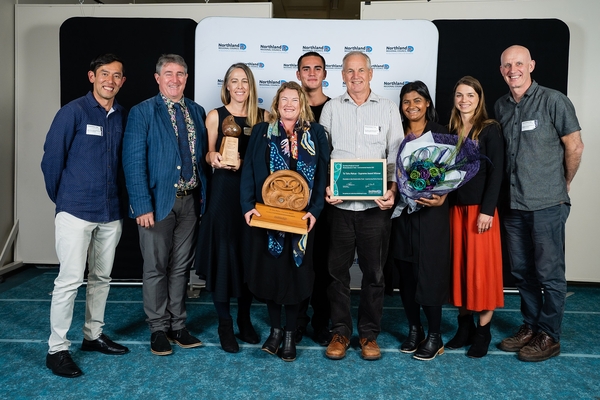 EMR was  one of 47 entries received and was announced at a ceremony attended by about 200 people at Kerikeri’s Turner Centre on Thursday 27 May.

He mauri o nga tangata
Nga mea katoa he pai
If we look after the water from the mountains to sea,
it will look after us.
It is our life force.

This year’s twentieth anniversary competition trip Thanks to Dive! Tutukaka and the Bobby Stafford-Bush Foundation took place on the 14th May and included students from as far north as Waiharara and as far south as Rakiura - Stewart Island. Students are selected based on their action projects undertaken and enthusiasm they show when studying & experiencing the marine environment. 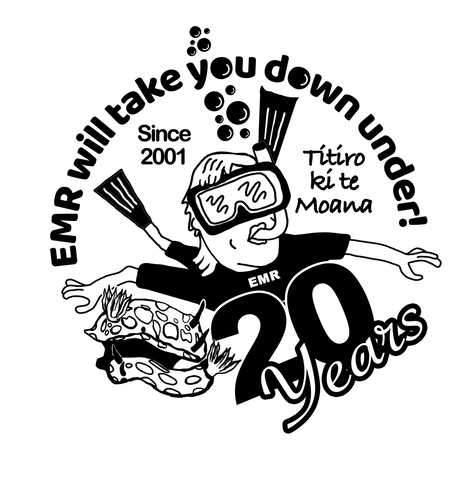 Water you doing on Friday 14th May? Join us for our 20 year anniversary dinner celebrating both the Experiencing Marine Reserves and Whitebait Connection Programmes.
Featuring presentations from students and community the evening will share some amazing success stories.

Tickets:
- $70 for supporters
- $35 for EMR/WBC coordinators and volunteers

Get your tickets via eventbrite!

We can't wait to sea you there for a whale of a night.

Contact This email address is being protected from spambots. You need JavaScript enabled to view it. for the special code to unloock discounted tickets for volunteers and coordinators 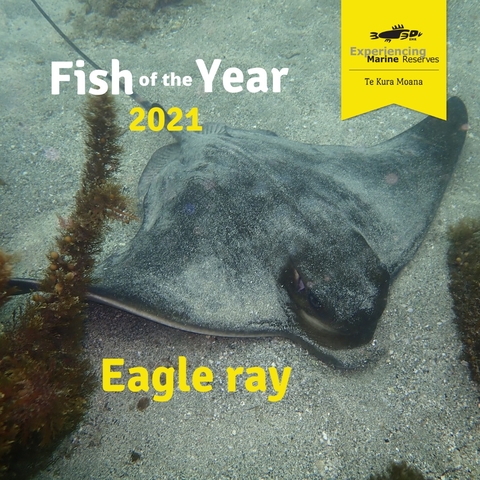 Eagle ray - Whai repo - takes out Fish of the Year !

The eagle ray is representing the cartilaginous fish family for Fish of the Year. Yes, that means they have no hard bones in their body and are in the same family as sharks and other rays. Eagle rays can be easily distinguished from other rays in New Zealand by their diamond shape. They flap their wings at the same time, like a bird, while other rays, like stingrays, are round in shape and ripple their wings to move.

Distribution and habitat: Eagle rays are found all around New Zealand as well as the Kermadecs, Norfolk Island, Southern and Western Australia.  Their habitat ranges from sandy flats, seagrass beds, estuaries and bays as well as near rocky reefs. They usually prefer to hang out in shallow water, however they have been found as deep as 422 metres!

Diet: Eagle rays mainly feed on benthic animals like crabs, clams and worms that are buried in the seabed. They use their unique mouths to crush prey to get at the soft bodies inside hard shells. They also have electro-sensory organs in their head in order to find their prey hidden in the sand, and using a jet of water they clear away the sand to expose their meal. This method of feeding is very noticable whilst snorkelling as it leaves large indentations (like craters) in the sand.

Breeding and behaviour: Eagle rays produce live young and can have litters of up to 20. They are usually 20 - 30 cm when born. The claspers on male eagle rays distinguish them from females making them relatively easy to tell apart. Females are generally larger than males.

Fun facts: Eagle rays were originally thought to be endemic to New Zealand until it was discovered that the Australian eagle ray species was identical. For defence against threats, eagle rays have a venomous spine on their tails (like other ray species). Eagle rays are a favourite snack of orca. 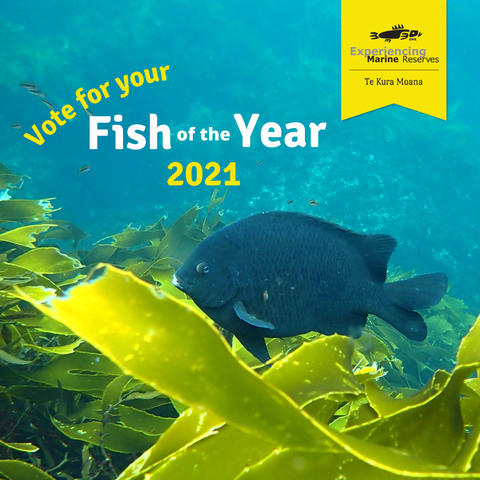 Voting has closed.  Winners will be announced soon!

Vote for your ‘Fish of the Year’ HERE  to be in to win cool prizes and recognition for your favorite ika (fish)! 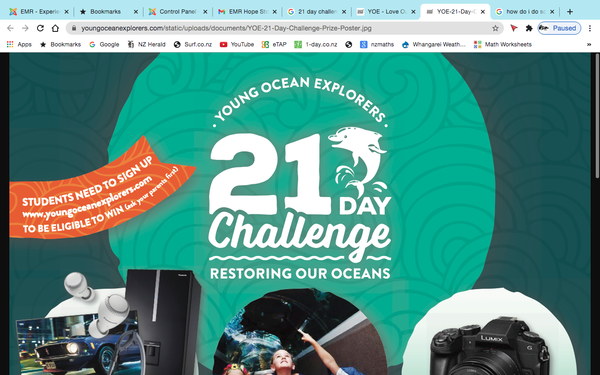 EMR features in one of the Hope stories https://www.youngoceanexplorers.com/yoe/video/1211161053149/#cplayer 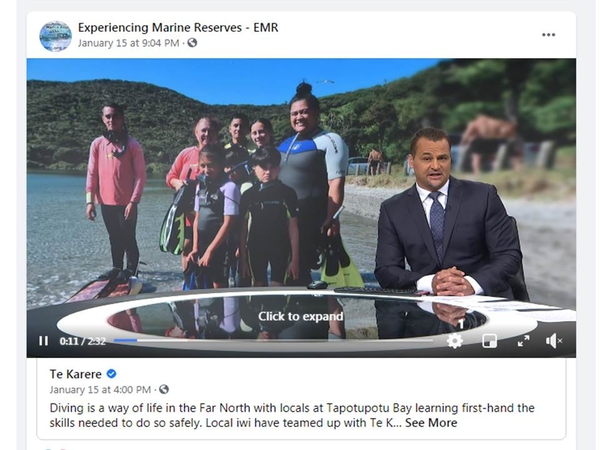 As we head into our busy season EMR has featured in national media several times !

Check out this story from Te Karere https://www.facebook.com/tekareremaorinews/videos/441121673709286 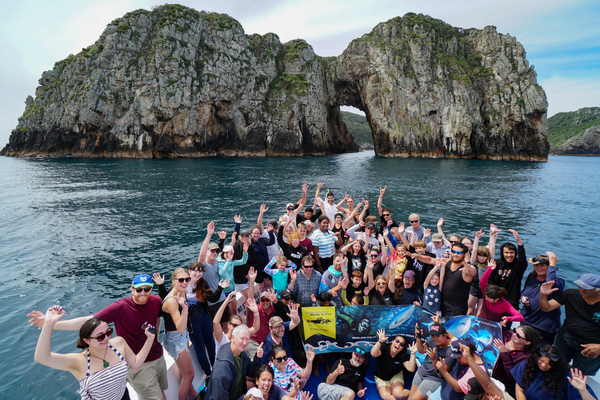 Thirty two rangatahi and their whanau from all around Aotearoa rewarded with Poor Knights snorkel experience!

The 19th annual EMR Poor Knights competition trip took place on Friday the 11th December. The trip was organised by Experiencing Marine Reserves (EMR) and made up of representative students from each school that participates in the programme from Northland and Auckland, as well as 2 representatives from the other 6 regions EMR is operating including Taranaki, Coromandel, Gisborne, Wellington, Nelson and Rakiura (Stewart Island). 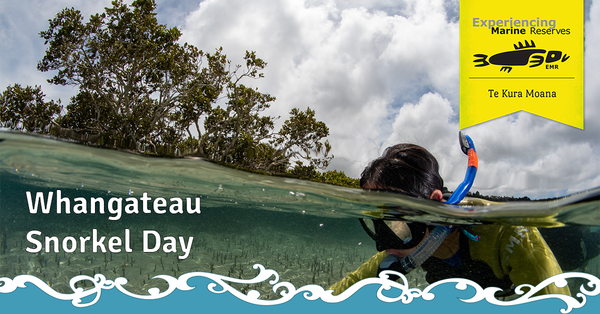 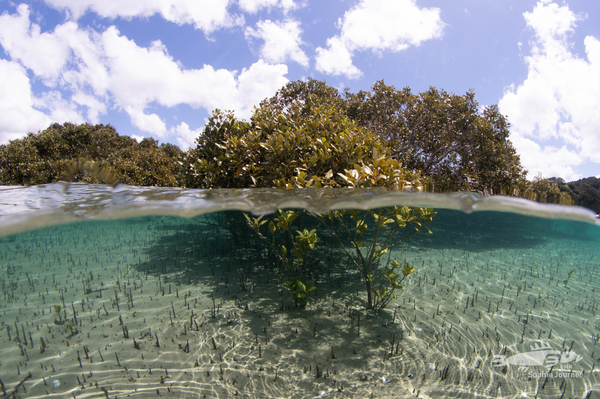 We got lucky this weekend with the perfect window of weather for our Whangateau Snorkel Day on Sunday, held in memory of the late Dr Roger Grace. Roger was a founding trustee of the Mountains to Sea Conservation Trust and spent many hours in the estuary doing his PhD research in 1966, pioneering science by SCUBA diving. Last year the Roger Grace Memorial Fund was created to continue to make waves for marine conservation. Please donate today www.emr.org.nz/roger-grace-fund

78 participants joined us on Sunday to explore the mangrove forests and sandstone reefs of Whangateau harbour. Whilst making our way out to the reef, snorkellers spotted hairy crabs, curious mantis shrimps, filtering anemones and weaving snail highways. After crossing the sandy flats of the harbour the reef started to reveal itself, with draping Neptune's necklace and schools of parore and spotties. On our way back to shore we stopped by the mangroves so we could get up close and personal with these important ocean loving trees. We saw barnacles waving their fronds in mesmerising patterns and marvelled at the cave like structures formed by the trunks and roots of the mangroves.

The event provides an opportunity to educate the public about the importance of mangrove forests as fish nurseries and to prevent coastal erosion, while immersing them in the habitat. We also covered the cockle closure and what that marine protection means in relation to water clarity.

Huge thank you to The Bobby Stafford-Bush Foundation for funding this event, to the Whangateau Holiday Park for providing accomodation for the volunteers and crew and of course to our amazing volunteers for guiding many new participants through the wonders of the Whangateau Harbour. 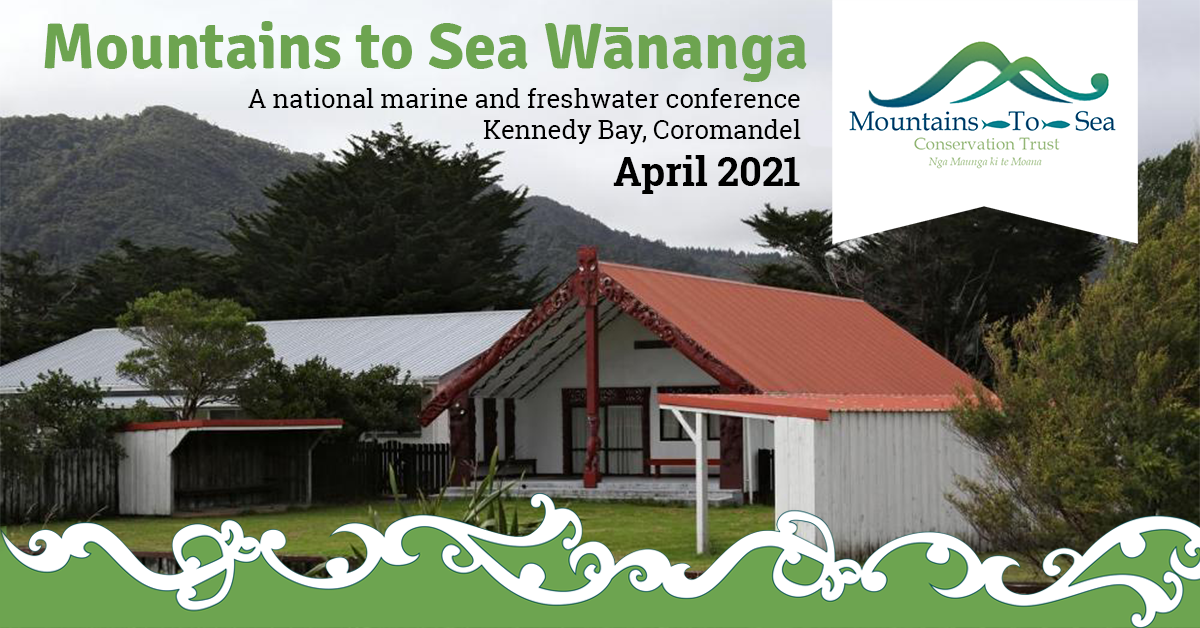 Registrations are now open for our Mountains to Sea Wānanga - register today.